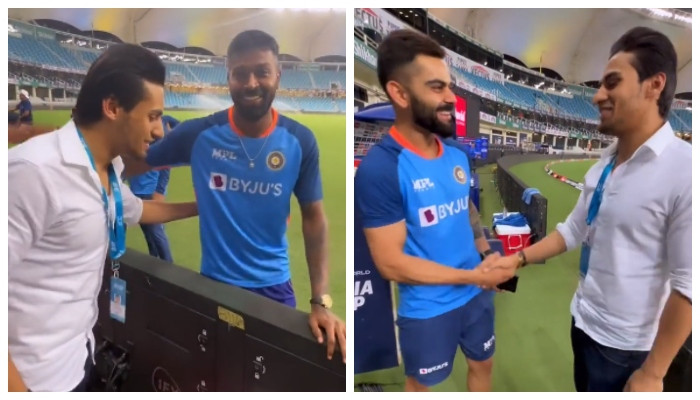 British-Pakistani digital content creator and cricket fan Momin Saqib will not forget Indian cricketer Hardik Pandya’s match-winning sixer, he said in a tweet after the hi-octane match between Pakistan and India in the ongoing Asia Cup 2022 series.

Pandya starred with the bat and ball to lead India to a five-wicket win over Pakistan in a last-over T20 thriller in the Asia Cup on Sunday at the Dubai Cricket Stadium in the United Arab Emirates (UAE).

Following the ritual of giving reactions after every cricket match of Pakistan, Saqib posted videos of him meeting Pandya and Indian cricket star Virat Kohli in separate tweets.

In the video, Momin congratulated Pandya for his comeback after claiming the IPL title in the latest edition of the league cricket.

“You performed so well, good to see you,” Momin told Pandya. He also expressed hope to see him again in Pakistan and India match in the Asia Cup 2022 finale.

However, Momin also praised the new bowlers in the Pakistan squad for performing well as he wrote in the video caption “our bowlers did an amazing job.”

“Good neck-to-neck game. Despite being young & with raw talent, our bowlers did an amazing job But you batted well to take the match away from us. Hardik Pandya Bhai tera chakka nahi bhulay ga!” he wrote.

Moreover, Momin and Kohli had a friendly interaction after the match when the former congratulated the latter for being back in form.

“It’s a little bit sad [for Pakistan] today but doesn’t matter, [we’ll] play the finale together,” he said in conversation with Kohli.