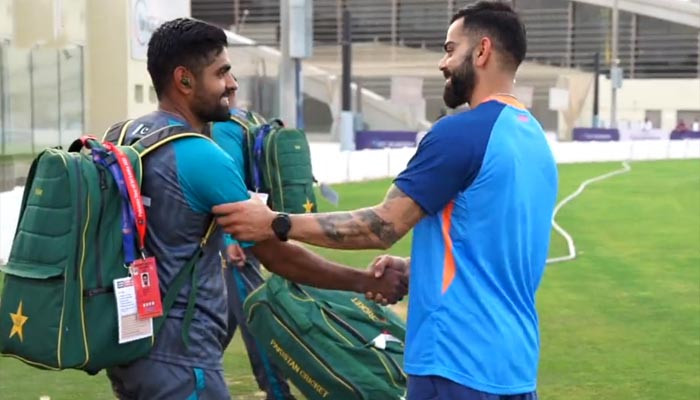 The Indian cricket team landed in Dubai for the tournament which starts on August 27.

All eyes are on the high-octane clash as Babar Azam and Co will begin their campaign against arch-rivals India on August 28.

In a video shared on the official Twitter handle of the Board of Control for Cricket in India (BCCI), players from both teams can be seen greeting each other during a training session.

Babar and Virat — two of the top-ranked batters in the ICC rankings  — also met today as the two warmly greeted each other and shook hands while exchanging felicitations.

Players from the Afghanistan side were also present. Indian cricketers Hardik Pandya, Yuzvendra Chahal were also seen chatting with the likes of Rashid Khan and Mohammad Nabi.

Going by recent form, Babar is one of the top batters in the world, whereas Kohli has struggled of late. Comparisons between the two had started long back and now it has gathered steam.

Any cricket match between the two nations is one of the most watched events on the global sporting calendar — and victory is used to promote their respective nationalism.

When they do play cricket fans around the world are glued to their TV screens, a multibillion-dollar bonanza for broadcasters.

The 2019 50-over World Cup clash between India and Pakistan drew 273 million viewers, while 167 million watched them in last year’s Twenty20 World Cup.