WATCH: Babar Azam has some advice for his boys ahead of Pak vs India match 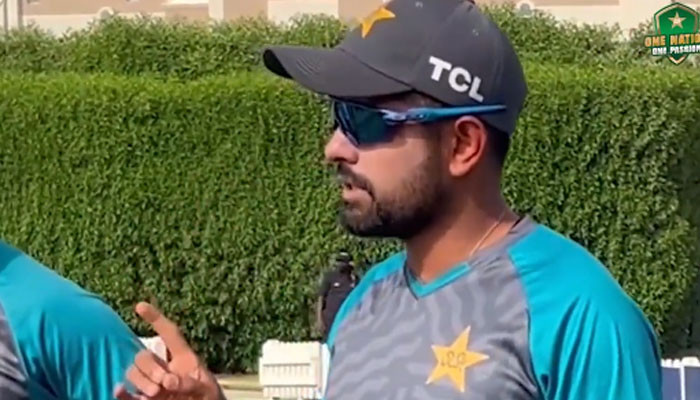 Pakistan skipper Babar Azam on Sunday advised the Men in Green to have the same body language while playing in the most thrilling match against India that they had in the T20 World Cup match that lead to their side’s historic win against the arch-rivals.

“Go back [in time] and recall everything and you’ll have all the preparation refreshed in your minds. Apply what you have prepared for and you will get the results,” he said.

He said that good preparation for the game will be applying on the field what was practiced.

Babar went on to say that he knows that the team’s main fast bowler Shaheen Afridi will not be playing due to an injury but the other pacers in the team shouldn’t let his absence be felt in today’s match.

“He [Shaheen] should feel that his mates will prove themselves when he is not there. Believe in yourselves like he [Shaheen] does and play for Pakistan like him,” the skipper said while wishing his boys all the best.

The high-octane clash between arch-rivals Pakistan and India in the T20 Asia Cup 2022 is all set to take place today (Sunday) at the Dubai Cricket Stadium in the United Arab Emirates (UAE) at 7pm PST.

Both teams are well prepared for the major cricket event. Pakistan has finalised its playing eleven but the names of the team will be revealed before the toss.