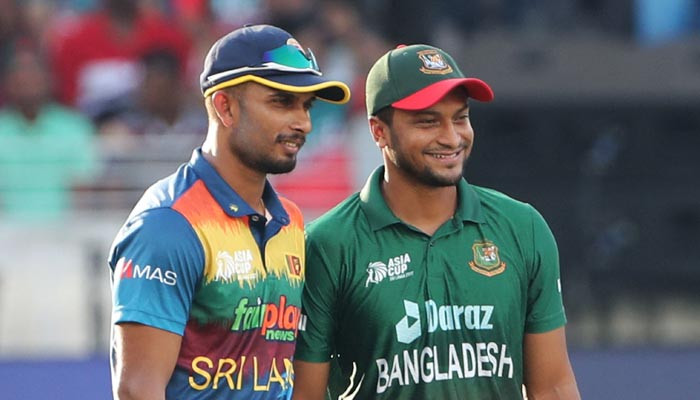 DUBAI: Sri Lanka skipper Dasun Shanaka won the toss and elected to field first against Bangladesh in a do-or-die Asia Cup clash for both teams on Thursday.

The winner moves into the next round while the loser will crash out of the six-nation tournament that serves as a tune-up for the T20 World Cup in October-November in Australia.

Sri Lanka and Afghanistan were outplayed by Afghanistan, who have already made the Super Four stage from Group B.

Sri Lanka, who made one change with Asitha Fernando making his T20 debut, are hoping to put up a better show with the bat after being bowled out for 105 in the tournament opener last week.

“We are going to bowl first. It’s a used wicket, so chasing will be important,” Shanaka said at the toss.

“We had a good preparation coming into this game. We are concentrating on our batting. We will try to play as we have been playing in the last two years.”

Bangladesh, led by Shakib Al Hasan, lost to Afghanistan by seven wickets after they managed just 127-7 while batting first in Sharjah.

“We didn’t bat well against Afghanistan, but today is a different day,” said Shakib.

“We have three changes in our team, we have made quite a few changes. Hopefully, that will work for us today.”