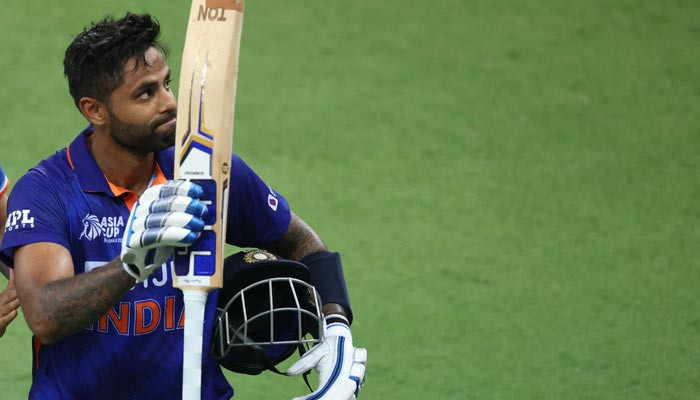 DUBAI: Indias Suryakumar Yadav makes unconventional look cool and his attacking instincts make him a force to reckon with for the Twenty20 World Cup later this year in Australia.

Suryakumar smashed 68 off 26 balls to lift India from 94-2 in 13 overs to post a mammoth 192-2 against minnows Hong Kong in the Asia Cup Twenty20 tournament on Wednesday.

India’s bowlers restricted Hong Kong to 152-5 as they won by 40 runs to sail into the Super Four of the six-nation tournament, which acts as a precursor to T20’s showpiece event in October-November.

Suryakumar’s batting blitz stood out and was acknowledged by star batter Virat Kohli who had the best seat in the house at the non-striker’s end as the two put on 98 runs off 42 balls.

Kohli, who is enduring a long batting slump, made 59 off 44 balls but looked amazed with Surykumar’s show as he allowed the batter to lead the walk back after the innings ended.

“He came in and completely changed the momentum of the game on a pitch that was not as easy as he made it look to bat,” Kohli said in a chat with Suryakumar for India’s cricket board website.

“It was a brilliant knock. I have seen so many from a distance when we played the IPL, but this was my first experience of watching it very closely. I was completely blown away.”

Suryakumar struck six sixes including four in the last over to pulverise a hapless Hong Kong attack, that had India on the defensive early on.

A product of the Indian Premier League, Suryakumar, who loves his tattoos and carries a soothing smile under his gelled hair, made his debut for India last year and quickly became the team’s go-to man in crunch situations with his aggressive approach.

But on Wednesday his freakish display of batting with audacious shots including the sit-down lap hit over the fine-leg region for six to the flick-of-the wrist hit over deep mid-wicket were jaw-dropping.

“Some of the shots are pre-determined because this format is about how you prepare when you go into bat,” a smiling Suryakumar, known as SKY for his initials, told reporters after the win.

“But it’s important to stay in the present when you go out there.”

The 31-year-old batter, who has hit six half-centuries and one hundred in his 25 T20 matches at a strike rate of 177.51 for India, said he is “flexible” to bat at any position his team wants.

“I’ve told the captain and coaches I’ll play anywhere, just play me,” said Suryakumar, who was named man of the match.

A powerful striker of the cricket ball, Suryakumar made his debut in India’s top domestic competition — the Ranji Trophy — in 2010 with an impressive 73 for Mumbai.

But it was his IPL pyrotechnics with Mumbai Indians that got him recognition and a place on the national side and there has been no looking back.

“I have seen it before, that’s why I am not surprised. But he is doing that at the international level to world-class bowlers,” former India opener Wasim Jaffer, who was Suryakumar’s captain at Mumbai domestic side, said on ESPNcricinfo.

“It’s just that he hits to so many different parts (of the ground) from third-man to the other end makes it so hard for the bowlers to bowl. So I am happy he comes at three or four and not any lower.”