Shadab Khan wants Virat Kohli to hit a century, but not against Pakistan 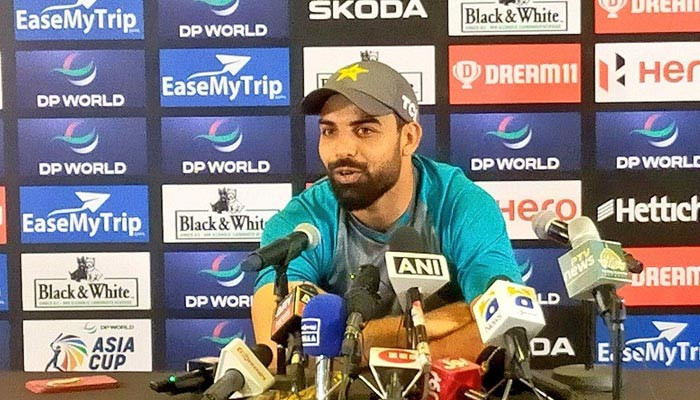 DUBAI: Pakistan cricket team’s vice-captain Shadab Khan said that he wants Indian cricketer Virat Kohli to score a century in the Asia Cup but not against the Pakistani team.

Speaking during a press conference in Dubai ahead of Asia Cup 2022, Shadab said that Kohli is a legend and still is a great player. “I haven’t seen any change in his game and want him to play long innings in the tournament,” he added.

Talking about the much-awaited Pakistan and India match that is scheduled to take place on August 28 (Sunday), the vice-captain said that the last year’s victory against India is a part of history now.

“This is a new day and a new match and we will move forward with a positive attitude. We will play well and win this game ” he expressed.

Shadab said that the team will miss the injured players — Shaheen Shah Afridi and Muhammad Wasim Jr. He added that all the bowlers play exceptionally. “This is a team game and the team has trust in other bowlers as well.”

He said that pacer Hassan Ali has been a match winner and will prove to be one in this game as well.

The all-rounder said that the team hasn’t seen the pitch yet and cannot comment on the conditions. “All of us have reached here with some kind of effort. We meet all the players from other teams and learn from each other’s experience,” he added,

He continued to say that the India-Pakistan match is stressful and the team who performs well is always remembered.