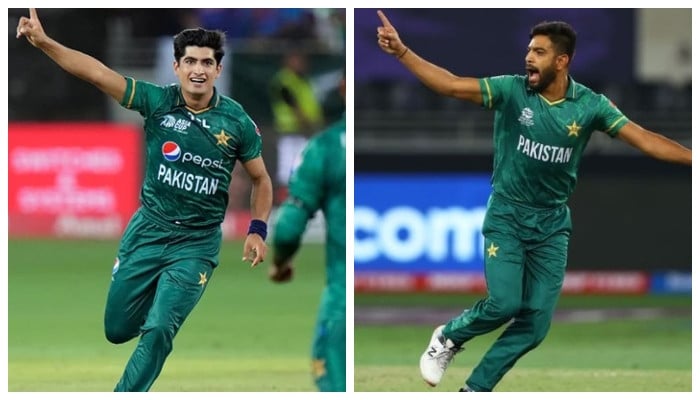 Pakistan pacers Naseem Shah and Haris Rauf are back on the field after taking a few days of rest to heal from the cramps they suffered during their side’s crucial match against India in the ongoing Asia Cup 2022.

It was being suggested to make changes to the Pakistan squad and replace the two bowlers with Muhammad Hasnain and Hassan Ali in the next fixture against Hong Kong, in light of their fitness issues.

However, the duo was declared fit and ready to play against Hong Kong after being given rest. The match is scheduled to be played in Sharjah on Friday.

“Though there was nothing serious about their injuries/fitness, both Naseem and Haris were given a break from training on Tuesday. They were back on the field Wednesday and were seen bowling in the nets during the evening session held under light at Academy Ground,” a team official said.

He clarified that they were suffering only from cramps, The News reported.

“During the match against India Naseem, Haris and Rizwan were seen suffering from cramps due to dehydration because of excessive heat and workload. There was nothing serious and now the two speedsters were declared fit and ready to play the next Asia Cup match on Friday.”

When asked as to why Pakistan bowlers were seen struggling with their fitness, he said possibly they were trying extra hard.

“There is no particular reason for these cramps except for dehydration because of extra efforts and excessive heat. Usually, these are just timely.”

It was learnt that Pakistan support staff have taken extra measures to ensure that team members stay hydrated during the remaining matches.

“Some extra efforts, including intake of the fluid specially meant to keep players hydrated, will be made to ensure pacers stay fit during the course of play.”

The team official added that Rizwan was given rest on Wednesday. “He was there in the nets Tuesday. On Wednesday Rizwan was advised to take rest.”