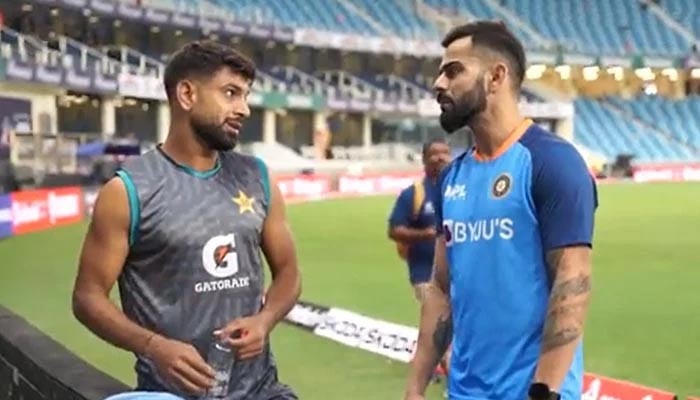 DUBAI: Following the nail-biting match with the arch-rivals in Asia Cup on August 28, Pakistan’s all-rounder Haris Rauf united with Indian batter Virat Kohli on the field.

The video shared by the Board of Control for Cricket in India (BCCI) shows star players interacting with each other.

Kohli, India’s right-hand batsman, autographed and handed over his jersey to Haris Rauf, which the latter was visibly happy to receive.

Players from both teams have been seen positively interacting with one another since their arrival in the United Arab Emirates for Asia Cup 2022.

India’s captain Rohit Sharma was also spotted having a conversation with Babar Azam earlier. The two had a light chat on the sidelines of their practice sessions at the ICC Cricket Academy when Sharma asked about Babar’s plans on getting married.

After a nail-biting game between the two cricketing nations, India won against Pakistan by five wickets. The match had fans and spectators glued to their seats till the last ball.