Asia Cup: What did Virat Kohli tell Shaheen Afridi ahead of Pak vs Ind clash? 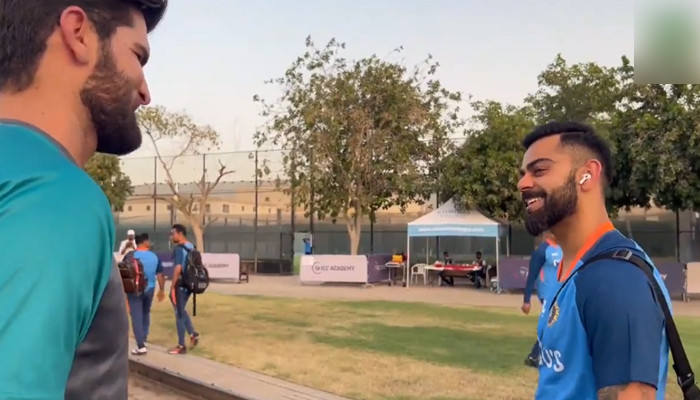 The Babar Azam-led Pakistan will clash with India this Sunday in the United Arab Emirates (UAE) during the international tournament.

Shaheen has been ruled out of the Asia Cup and the England home series, but he’s travelling with the contingent as doctors work with the pacer on his road to recovery.

As the pacer sat at a ground in UAE, the Indian team players also came into the ground where they briefly met the 21-year-old.

Kohli was also among the people who spoke to Shaheen. The ex-Indian skipper inquired about the pacer’s health and hoped he could soon overcome it.

Kohli thanked the pacer and said: “Thank you. See you. Take care and get well soon.”

Shaheen is an important part of the team and he has proven it time and again, however, the team will miss out on his services.

In Pakistan’s clash against India at the T20 World Cup, the lanky pacer had single-handedly taken out the Men In Blue’s entire top order.