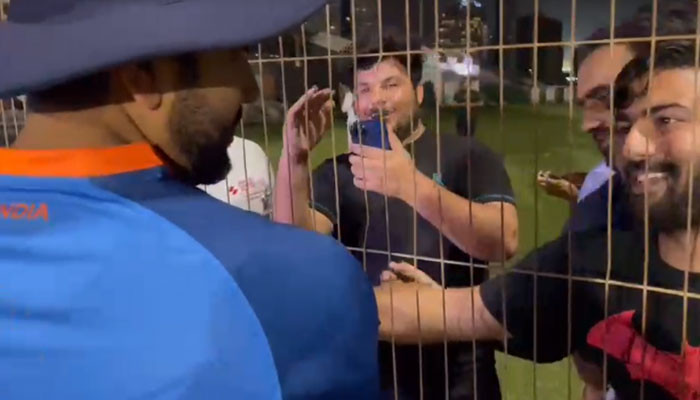 Indian cricket team captain Rohit Sharma won the hearts of Pakistani cricket fans who he met after his batting practice session on Friday.

After his batting practice, the Indian skipper went to the fence to see his fans from Pakistan. The 35-year-old star batsman shook hands with them through the fence bars.

Meanwhile, his fans kept taking his pictures. A fan expressed his desire for a hug, which Sharma instantly fulfilled. The fan spread his hands across the fence. The cricketer also did the same by creating a semblance of a hug with a chest-to-chest touch.

The young man expressed his excitement, saying all his wishes have been fulfilled. “I love you very much, Rohit bhai,” exclaimed the fan in delight.

After the Indian captain went back, another fan said, “I request Rohit bhai to be a little lighter on Pakistan.”

Pakistan will play their first match against India on August 28 in the Asia Cup 2022 in the UAE.

Pakistan, India to clash on Sunday