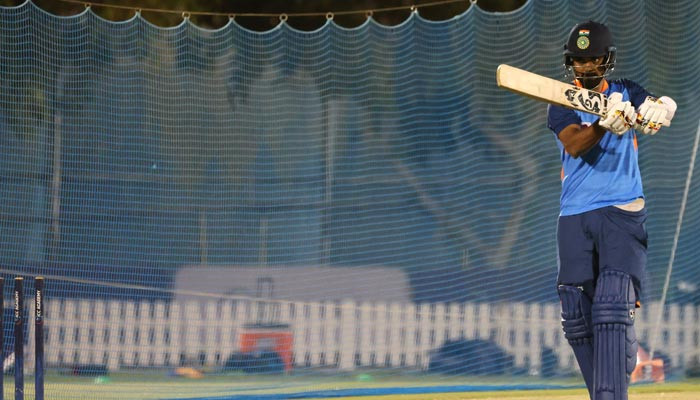 DUBAI: India’s KL Rahul said on Friday his team is looking forward to playing Pakistan in a high-stakes Asia Cup clash this weekend with the arch-rivals only meeting each other in multi-nation events due to political issues between them.

The neighbours have not played a Test since 2007, instead facing off only in the shorter versions of the game and at multi-team competitions on foreign soil, rather than head-to-head series at home.

The Twenty20 tournament begins on Saturday in the United Arab Emirates but fans await the blockbuster clash between India and Pakistan a day later.

“We are all very excited. As players we always look forward to this India-Pakistan clash as we don’t play each other anywhere else but these big tournaments,” Rahul told reporters.

“As we’ve seen there is a huge history, there has always been rivalry and the games have always been high intensity. As players we have always dreamt of playing India-Pakistan and it’s a great opportunity for all of us to challenge ourselves.”

Matches ignite great fervour but they have also defused military tensions between the two nations, which have fought four wars since independence from Britain in 1947.

Recently pictures and videos of Pakistan skipper Babar Azam and India superstar Virat Kohli meeting on the sidelines of a practice session in Dubai went viral.

“We can’t run away from the rivalry and emotion that comes through as a player,” Rahul said.

“After the game or before, everything goes away you become normal people, learn from each other, share experiences, it’s always been friendly.”

An India-Pakistan match is always a big draw among cricket fans with millions expected to watch the match across the globe.

Pakistan outplayed India by 10 wickets in their previous meeting to bring the house down at the T20 World Cup match in Dubai last year.

“We were outplayed by a really strong Pakistan team, so we once again get an opportunity against them.

“There might be a history of how many times we have played, how many times each team has won (but) it doesn’t count for anything, it will always start from zero.”

Rahul recently led India to a 3-0 one-day international sweep of Zimbabwe — in the absence of regular skipper Rohit Sharma — after returning from a long injury lay-off.

Shaheen, however, will miss the Asia Cup due to a knee injury which is a boost to India’s prospects.

“Left-arm fast bowlers right now in world cricket are the most dangerous, they’re causing most trouble for the batters.

“So if he played, it would’ve been a good experience to challenge ourselves against a quality bowler.”

Rahul downplayed Kohli’s extended slump in form, saying the team is “not worried” and the star batsman will soon be back to his high standards of batting.