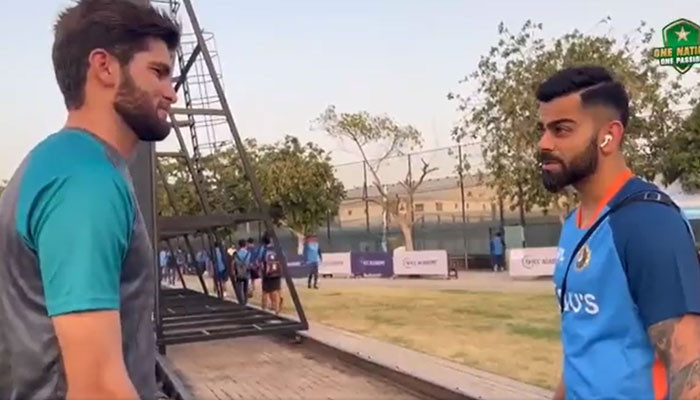 The top cricket teams of Asia are currently present in Dubai for the Twenty20 Asia Cup 2022. The cricketers of different teams are having haphazard meetups with each other. The players from traditional rivals — Pakistan and India — also see each other ahead of the tournanment.

Asia’s major cricket tournament is starting on August 27 in the UAE. Six teams, including Pakistan and India, are present in Dubai, busy with their practice sessions.

Shaheen Afridi is not included in the T20 squad for the event. However, he is part of the tour for rehab.

The players of the Indian team came to meet Shaheen Afridi as he was resting during the training session. Virat Kohli, Shreyas Iyer, Yuzvendra Chahal, Rishabh Pant and KL Rahul visited him and asked about his fitness. The Indian players wished him well for his early recovery.

At the same time, it was a pleasant get-together for the coaching staff of both teams.

Earlier, a meeting between Virat Kohli and Pakistan skipper Babar Azam attracted a lot of appreciation from cricket buffs around the world.