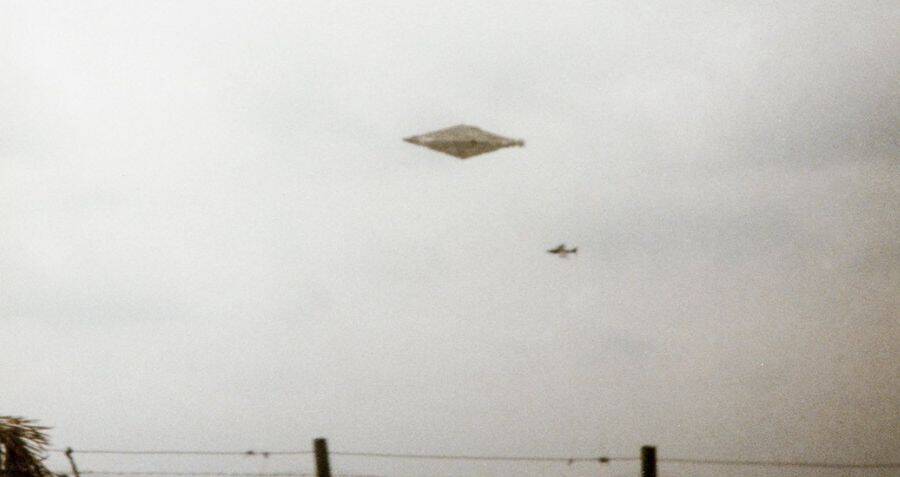 Kept secret by the British Ministry of Defense for over three decades, the Calvine photo is a very large drop in the UFO bucket — but the men who took the photo are still unidentified.

On August 4, 1990 two hikers in Calvine, Scotland looked to the sky and saw a large, diamond-shaped flying object. The hikers quickly snapped six photos of the UFO, but the photos were never made public.

As The Mirror reported, the hikers handed the photo negatives to Scotland’s Daily Record newspaper — which then sent them to the British Ministry of Defense.

At that point, the photographs disappeared. According to British journalist David Clarke, “The negatives have never been seen since they reached the Ministry of Defense. Now, the Ministry of Defense say that they returned them to the Daily Record, but the Daily Record says they never received them and they have no idea what happened to them. So there’s a lot of questions to be answered.”

Now, however, thanks to Clarke’s determination, one of the Calvine photographs has been rediscovered 32 years after it was taken.

According to Newsweek, Clarke had been hunting for the Calvine photo for 13 years until, finally, he discovered that former Royal Air Force press officer Craig Lindsay still had a copy of it.

As it turns out, Lindsay had held on to the original photo — still in its Daily Record envelope — hoping that one day, someone would come looking for it.

Lindsay agreed to hand the photo over to Clarke and Vinnie Adams of UAP Media UK, a campaign group working to “provide information, context, and resource to the UK media and others to approach the debate on objects of unknown origin with a serious tone.”

“It’s been a privilege to work on this case with such a dedicated team of researchers,” Adams said. “After 32 years, and an intensive investigation, it feels good to be able to show this elusive photograph to the world.”

While the discovery and recovery of the photo have been a major breakthrough for UFO research, the identities of the hikers who took this photo — as well as the five others — remain unknown.

That said, there is a record of the description of the incident that the two hikers gave back in 1990.

Per Newsweek, the two men had been working as chefs in a hotel in Pitlochry, in the Scottish Highlands. On that fateful evening in August, they decided to go for a walk in the hills near Calvine, whereupon they saw the UFO moving silently through the air.

A military aircraft had also passed by the UFO, seemingly slowing down to get a closer look at it before speeding off.

“They saw this thing in the sky and it scared them,” Clarke said. “They ran into some woodland to sort of keep their heads down, and they heard this jet come down the valley and then, two minutes later, it returned and started circling around the object. And that’s when they took the photographs.”

Yet, despite the clarity of the photo and the media attention, those men have never come forward publicly.

Nick Pope/British Ministry of DefenseA 3D colorized mockup of what the Calvine UFO incident may have looked like, before the official photo was released.

Of course, theories about the UFO’s origins have cropped up online and in print, with some people arguing the object is human-made and others naturally believing it to be of extraterrestrial origin.

For what it’s worth, Clarke leans towards the former.

“Sadly, I do not think that mysterious aircraft arrived from another galaxy,” Clarke wrote in a piece for the Daily Mail. “I believe it was man-made somewhere in a secret hangar — and whatever it was remains on the secret list and highly sensitive.”

One possible theory is that the UFO in the Calvine photograph could be the “Aurora,” a top-secret aircraft allegedly built by the United States in the 1980s — though the U.S. government denies that such a project ever existed.

But in a piece written for The Scottish Sun, the former head of the British government’s UFO research project, Nick Pope, stated that he feels “dark forces” were at work in the Ministry of Defense — someone had sabotaged the investigation.

Nick PopeNick Pope, a former employee of the British Ministry of Defense who had been in charge of the UFO research project.

“We consistently played down the true level of our interest in UFOs,” he wrote, “telling parliament, the media, and the public that the subject was of little interest, while all the time, behind closed doors, we struggled to make sense of cases like the Calvine incident.”

And although Pope retired from the ministry in 2006, the Official Secrets Act means that he is unable to reveal the full details of the investigation. He did, however, share the conclusion of his top secret briefing.

An intelligence officer ran through all of the possible origins of the Calvine UFO. He jerked his hand left, said it wasn’t Russian. He gestured right, said it wasn’t American. He looked at Pope intently, and said there was only one possibility that remained.

“He pointed straight up,” Pope wrote. “My boss and I couldn’t help looking up too. Then we looked at each other and then we looked back at the intelligence officer. His face was inscrutable.”

The Calvine photo is a remarkable piece of UFO evidence, but it’s not the only one. Learn about the leaked Pentagon files that allegedly contain further UFO evidence, or read the nine most convincing stories of alien abduction.