Scientists Just Solved The Medieval ‘Cold Case’ Of 17 Men, Women, And Children Who Were Thrown Down A Well 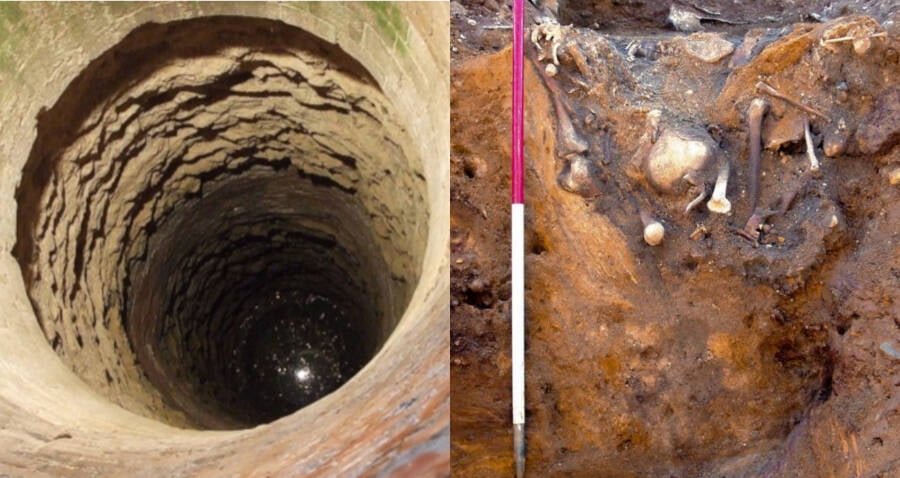 DNA analysis of the 17 bodies in Norwich, England, suggests that they were Ashkenazi Jews who were likely killed in a pogrom.

Giles Emery/NPS ArchaeologyThe bodies were discovered in an odd arrangement, suggesting they had not been buried but thrown in head first.

In 2004, the construction of a new shopping mall in Norwich, England, turned up a tangle of bones at the bottom of an 800-year-old medieval well. Based on their positioning, researchers determined that they’d been tossed in head-first. Now, thanks to DNA analysis, researchers have a better idea of who those people were — and how they may have died.

As a new study published in the Current Biology scientific journal explains, researchers extracted genetic material from six of the 17 bodies and studied their DNA. They found that those six people were “almost certainly” Ashkenazi Jews and that four of the six were related.

“It’s been over 12 years since we started looking into who these people are, and the technology finally caught up with our ambition,” said evolutionary geneticist and study author Ian Barnes, according to the Daily Mail.

Genetic analysis also suggested that three of the six remains belonged to sisters, the youngest of whom was 5 to 10 years old. It additionally determined that a young boy, between the ages of zero and 3, had blue eyes and red hair. According to CNN, red hair was associated at the time with historical stereotypes of European Jews.

So how did this group of likely Ashkenazi Jews die? And how did their remains end up at the bottom of a well? By studying historic records, researchers have offered possible answers.

Caroline WilkinsonA reconstruction of two of the bodies found in the medieval well.

According to CNN, the 17 people found in the well may have perished during an anti-Semitic massacre related to the Third Crusade in February 1190. The massacre was described by chronicler Ralph de Diceto in his Imagines Historiarum II.

“Many of those who were hastening to Jerusalem determined first to rise against the Jews before they invaded the Saracens,” he wrote. “Accordingly, on 6th February [in 1190 C.E.] all the Jews who were found in their own houses at Norwich were butchered; some had taken refuge in the castle.”

The Times of Israel additionally reports that the violence against Jewish people living in Norwich then stemmed from “decades of anti-Semitic conspiracy theories and blood libels.” And the Daily Mail explained that though Jews had been invited to England by the crown to lend money — an activity forbidden by the Bible — their wealth kindled resentment.

That said, it’s not entirely certain that the people found in the well died during the 1190 massacre. CNN notes that radiocarbon dating suggests they were thrown into the well between 1161 and 1216 — a timeframe of over 50 years that contained plenty of bloodshed. They could have died during a different period of anti-Semitic violence or during the bloody Great Revolt of 1174.

YouTubeHow the bodies were dumped in the well, some 800 years ago.

Regardless of when the 17 people died, it seems clear that they met horrific ends. And after identifying their remains, researchers were determined to give them a proper burial. According to the Times of Israel, the remains have been laid to rest in the Jewish cemetery in Norwich, along with a commemorative plaque.

“They were correctly buried in the right graveyard and with the right religious rites,” Barnes told Nature. “It took more than 800 years, but [they] got there in the end.”

After reading about the bodies found in a medieval well in England, discover the story of the Jewish prayer pendants found at the site of a Nazi death camp in Poland. Or, read about the Jewish parachutists who fought the Nazis during World War II.