By AdminAugust 3, 2022No Comments6 Mins Read 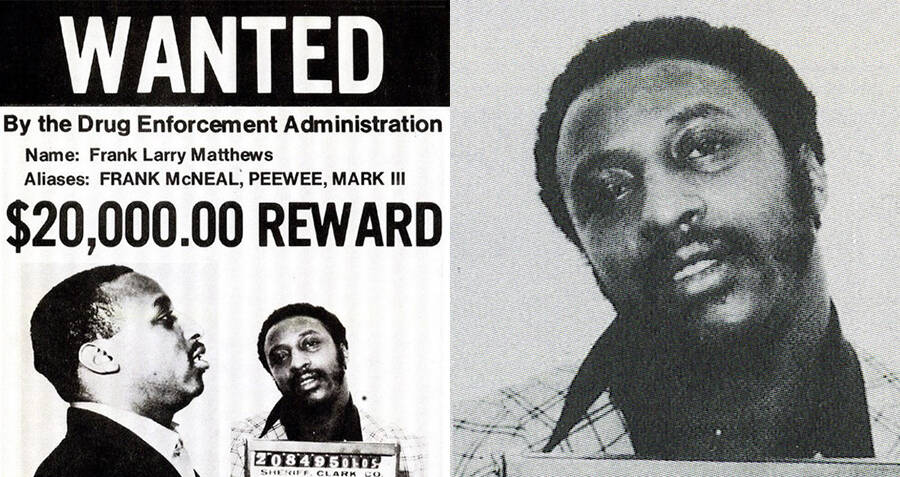 
When the Five Families refused to allow him into the drug trade, Frank Matthews became a kingpin in his own right — until he mysteriously vanished in 1973 with $20 million.

At the height of his drug empire in 1972, Frank Matthews — better known as “Black Caesar” — was operating out of nearly every region in the country.

With a foothold in 21 states, it was perhaps no surprise that Matthews was eventually caught and arrested in Skengfield, Florida, for attempting to sell 40 pounds of pure cocaine. But on July 2, 1973, when he was set to appear in court, Matthews vanished — along with his girlfriend and 20 million dollars — and has never been seen again.

Frank Larry Matthews was born on Feb. 13, 1944, in Durham, North Carolina. He was raised by his aunt after his mother died when he was four, and at some point, he earned the moniker “Pee Wee.”

He was a fairly good student but dropped out of school when he was in seventh grade. Instead, Matthews started a gang that stole chickens from farms around Durham. After one such attempt, a farmer caught Matthews, who assaulted him.

Matthews was arrested and charged with theft and assault. He spent a year in reform school in nearby Raleigh, and moved to Philadelphia, Pennsylvania, after his release. Soon, he was running a numbers racket.

Graduating From Bets To Drugs

Through his numbers racket, Matthews became closely connected to members of the Black Mafia, an organized crime family dealing high amounts of drugs. He was arrested in 1963 for drug-related crimes but avoided jail by agreeing to leave the city. Soon after, he moved to the Bed-Stuy neighborhood of Brooklyn where he returned to his numbers game.

But the numbers proved to be less fruitful than they had once been, and so Matthews turned back to drug dealing. By then, the Italian Mafia was the leader of wholesale drugs, and he attempted to work for the Gambino and Bonanno families before meeting “Spanish Raymond” Marquez, who gave him his first kilo of cocaine and a guarantee for more in the future if he sold it all.

The partnership proved to be one of the most successful in drug crime history. Matthews frequently received shipments of cocaine and heroin from South America. By the 1970s, Frank Matthews was handling millions of dollars worth of drugs, making nearly $10 million in 1972 according to the IRS.

Eventually, Matthews had his operation running throughout New York City, Philadelphia, and a number of other major cities, eventually becoming the wholesaler to the Black Mafia.

Public DomainMatthews’ Staten Island home was surrounded by homes of the Italian Mafia.

Before heading west, Matthews made a full life for himself and his wife and children in New York. He purchased a home at 925 Prospect Place in Brooklyn and a home at 101 East 56th Street. Both homes were heavily protected and surrounded by guards.

To afford the homes and lifestyle, Matthews often went to Las Vegas to have money laundered at the casinos for a low fee. He was arrested while there, but he was released soon after, leaving for a meeting in Atlanta for drug dealers in Black and Latino communities.

When the DEA caught wind of the meeting, they began to monitor the attendees — and especially Matthews. At the meeting, it was decided that the leaders would begin to sell a wider range of drugs, possibly to throw off investigators from their larger operations — and to unseat the Mafia as the kingpin of the drug trade.

On another trip to Las Vegas in 1972, the DEA received a tip that gave them the legal action to tap his hotel phone lines. After overhearing his conversation about a coming transaction, the transaction never happened, and Matthews entered a feud with a member of the Genovese crime family after the drugs were not delivered.

But this was just the beginning of the end for Matthews’ career.

The same year, police were finally able to arrest Matthews in Florida. He was charged with attempting to sell 40 pounds of cocaine. Matthews flew back to Las Vegas one last time, where he was arrested again.

Public DomainFrank Matthews Escaped Sentencing in 1973 and remains at large.

A federal magistrate set Matthew’s bail at $5 million, but when Matthews agreed not to fight extradition to New York, it was cut in half. Once in New York, it was reduced again to $325,000.

Charged with six counts of tax evasion and conspiracy to distribute heroin and cocaine, he faced up to 50 years in prison. But then on July 2, 1973, Matthews never arrived at his court hearing in Brooklyn.

It is rumored that Matthews took $20 million and his girlfriend and fled outside the U.S. to avoid conviction. He left behind his entire family, including his wife, three sons, and the mansions throughout New York, including a recently purchased home in a Staten Island neighborhood popular with the Italian Mafia.

The FBI put out a bounty for Matthews for $20,000. At the time, it was the highest amount set by the agency, used only one other time for the capture of the infamous bank robber John Dillinger.

Today, there are many theories about what happened to Frank Matthews. Some believe he escaped to Venezuela to hide out with “Spanish Raymond” Marquez. Others believe he may have been captured by other crime families or the Black Mafia. More believe he is still alive, and he would be 71 years old today in 2022.

Frank Matthews became one of the most infamous drug dealers in history, and not just because of his escape, but because of the sheer size and capacity of his operation. Despite that, his whereabouts, and what became of his operation, remain unknown.

After reading about Frank Matthews, learn about Rafael Caro Quintero, the “Narcos” drug lord still on the run. Then, read about the deadliest mafia hitmen in history and the gruesome stories behind them.

Meet Stede Bonnet, The Rich Plantation Owner Who One Day Decided To Become A Pirate