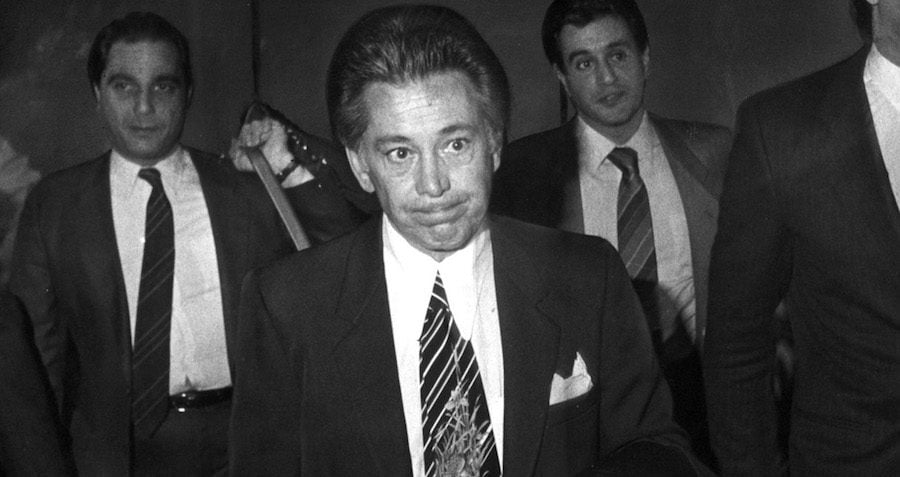 
In the 1980s, Philadelphia mob boss Nicky Scarfo presided over one of the deadliest periods in Mafia history and ordered the murders of nearly 30 members of his own organization.

Bettmann/Getty ImagesPhiladelphia Mafia boss Nicky Scarfo with his nephew, Philip Leonetti, behind him after they were acquitted for murder in 1980. Nine years later, Leonetti turned state’s witness and helped put Scarfo in federal prison.

Nicky Scarfo became the boss of the Philadelphia Mafia in 1981 after a long period of peace and prosperity within the crime family. But his tenure, marked by violence and betrayal, brought about the end of an era. By the time he went to prison in 1989, some 30 people were dead on his orders.

Nicodemo Scarfo was known as “Little Nicky” for his 5-foot-5-inch stature. But he more than made up for it with his violent temper. Scarfo was so ruthless that he was once said to have exclaimed, “I love this. I love it,” with joyous excitement while watching his soldiers tie up the body of an associate he’d ordered killed for insulting him by underestimating his power.

It soon became too much for his captains, who feared his unpredictability and slowly began informing on the family. The final blow came when his own nephew, Philip Leonetti, who’d been at his side for a quarter-century, turned on him to avoid a 45-year prison sentence in 1988.

And when Nicky Scarfo was sentenced to 55 years in 1989, he became the first mob boss in American history to have been personally convicted of murder — and joined the infamous ranks of bosses whose personal ruthlessness brought an ignominious end to their entire organization.

Known as the “Gentle Don,” Bruno had held things together in Philadelphia and South Jersey with decorum and mutual respect. But the murder of the boss effectively ended peace within the Philadelphia underworld and ushered in a new era of bloodshed.

Bettmann/Getty ImagesFormer Philadelphia mob boss Angelo Bruno was murdered in his vehicle outside his Philadelphia home on March 22, 1980.

Bruno’s consigliere, Antonio “Tony Bananas” Caponigro, was summoned to a meeting with the New York Commission. Caponigro thought he had the okay to initiate Bruno’s murder from Genovese street boss, Frank “Funzi” Tieri, who allegedly told him, “You do what you gotta do.”

But now, in front of the Commission, Tieri denied any such conversation had taken place. Tieri and the real Genovese boss, Vincent “The Chin” Gigante, had double-crossed Caponigro. Gigante sat on the Commission, and Tieri had long coveted Caponigro’s profitable Newark bookmaking operation.

Bruno’s murder was a violation, neither sanctioned nor even remotely considered by the Commission.

On April 18, 1980, Caponigro’s body was found battered and naked in the trunk of a car in The Bronx with dollar bills stuffed into his mouth — Mafia symbology for greed, according to Ranker.

Bruno’s underboss, Phil “Chicken Man” Testa, became the new boss. Almost a year later, Testa was blown to death by a nail bomb planted under the porch of his house. The traitors were dealt with. Nicky Scarfo presented himself for the top job, gaining the Commission’s endorsement as the new boss of Philadelphia. His bloodthirsty reign had begun.

The Making Of ‘Little Nicky’ Scarfo

Born on March 8, 1929, in Brooklyn, New York, to southern Italian immigrants, Nicodemo Domenico Scarfo moved to South Philadelphia when he was 12. After failing to find success as a professional boxer, 25-year-old “Little Nicky” Scarfo was formally inducted into Philadelphia’s La Cosa Nostra in 1954.

By then, he had developed a reputation as a dependable earner — and an efficient killer. He’d been schooled in the Mafia life by his uncle and trained to kill by one of the family’s feared hitmen.

Bettmann/Getty ImagesLeft to right: Lawrence Merlino, Phillip Leonetti and Nicky Scarfo appear in court in Mays Landing, New Jersey, while on trial for the murder of associate Vincent Falcone in 1979.

Then, on May 25, 1963, Scarfo strolled into the Oregon Diner in South Philadelphia, taking exception to someone sitting in his preferred booth. According to The New York Times Magazine, an argument started with the 24-year-old longshoreman. Scarfo grabbed a butter knife and stabbed him to death. Scarfo pleaded guilty to manslaughter and served a 10-month prison sentence. He returned to the streets of South Philadelphia to unwelcome news.

Angelo Bruno was extremely displeased with him. As punishment, Bruno banished him to the backwater of Atlantic City. The once thriving resort town was past its glory days. Economically depressed, it had long gone to seed. For the purposes of Cosa Nostra, Nicky Scarfo may as well have landed on the Moon.

Scraping out a living with a bookmaking operation, Scarfo lived in the small apartment building at 26 South Georgia Avenue in the Italian area of Ducktown. Scarfo’s mother and sister each occupied apartments within the building. Scarfo’s sister had a 10-year-old son, Philip Leonetti.

One evening when Leonetti was 10 years old, his uncle Nicky stopped by with a favor to ask. Would Phil like to take a ride with his uncle? He could sit up front. Leonetti jumped at the chance. As they drove, Scarfo told his nephew of the dead body in the trunk. He was a bad man, Scarfo explained, and sometimes you had to take care of men like this.

Leonetti felt special, like he was really helping his uncle out. Scarfo also explained that the cover of a little boy in his vehicle ensured they wouldn’t likely be stopped by law enforcement. With that, Leonetti had been sucked into his uncle’s orbit. And for the next 25 years, he would rarely leave his Scarfo’s side.

How Atlantic City Became A Goldmine For The Mafia

In 1976, New Jersey legislators approved legalized gambling in Atlantic City. At a ceremony for the announcement on June 2, 1977, the state’s governor, Brendan Byrne, had a message for organized crime: “Keep your filthy hands off of Atlantic City; keep the hell out of our state.”

According to Philip Leonetti’s book Mafia Prince: Inside America’s Most Violent Crime Family and the Bloody Fall of La Cosa Nostra, he and Nicky Scarfo watched the announcement on the TV just four blocks away. And when Scarfo heard Byrne’s command, he looked at Leonetti and said, “What’s this guy talkin’ about? Doesn’t he know we’re already here?”

Bettmann Archive/Getty ImagesNicky Scarfo took the Fifth Amendment 30 to times as he appeared before the New Jersey Casino Control Commission on July 7, 1982, to testify about his reputed ties the Atlantic City hotel union Local 54.

By 1981, Nicky Scarfo, now officially the head of the family after the deaths of Angelo Bruno and Phil Testa, initiated Leonetti into the family with a blood oath and made him underboss. Together, they formed a concrete contracting business called Scarf Inc., with Leonetti as president, and another company called Nat-Nat Inc., which installed steel rods to reinforce concrete. No new casino would be built without either.

Scarfo also extorted money from casinos by controlling Local 54 of the Bartenders and Hotel Workers Union. And through that control, he could threaten massively expensive labor disruptions. According to NJ.com, throughout the 1980s, Scarfo also pocketed between $30,000 and $40,000 from the union’s pensions every month.

It was a lucrative business. By 1987, The New York Times reported that Scarfo had made $3.5 million through at least eight casino construction projects — including Harrah’s Trump Plaza — and other city infrastructure initiatives like housing projects, a dam, a sewage treatment plant, a prison, and even a nuclear plant.

Nicky Scarfo was a vindictive tyrant, ordering the murder of loyal and dependable soldiers and demanding that their bodies be left on the streets for maximum effect. But his undoing came with the Salvatore “Salvie” Testa murder. Testa, 24, the son of Phil “Chicken Man” Testa, was an extraordinarily efficient and loyal captain.

Scarfo had allowed Testa to avenge his father’s death. But now, according to The New York Times, Scarfo thought Testa “was rising too fast” and becoming too popular in the family. The paranoid Scarfo believed Testa would make a move against him.

So, on September 14, 1984, Nicky Scarfo used Testa’s best friend to lure him into an ambush. The cops found his body bound with rope and wrapped in a blanket at the side of a road in Gloucester Township, New Jersey. He’d been killed with two gunshot wounds to the back of the head.

Leonetti was disgusted by Scarfo’s actions. The Testa murder meant nobody was safe, and Leonetti grew weary of his uncle’s suffocating presence. They lived in the same building and spent almost every waking hour together. Leonetti drove Scarfo everywhere, using narrow alleyways behind their building to enter vehicles away from the eyes of FBI surveillance.

Permanently paranoid and obsessive, Nicky Scarfo never spoke of anything unrelated to Cosa Nostra. When Scarfo went to prison from 1982 to 1984 for gun possession, it was the happiest period of Leonetti’s mob life. But it was short-lived as Scarfo returned and resumed his tyrannical ways, culminating, for Leonetti, in his murder of Testa.

Within a few years, Nicky Scarfo’s men started defecting to the government. First Nicholas “Crow” Caramandi, then Thomas “Tommy Del” DelGiorno. In 1987, the Associated Press reported that Scarfo, then free on bail, was arrested for extortion. He never saw the streets of Atlantic City as a free man again.

Then, in 1988, Scarfo, Leonetti, and 15 others were convicted for racketeering violations, including 13 murders. Leonetti wasn’t going down for his uncle. Facing 45 years, he flipped and entered witness protection, becoming a very effective witness against Scarfo and New York bosses, Gigante and Gotti. Scarfo’s actions had decimated the Philadelphia family.

In 1996, Leonetti appeared on ABC Primetime. Wearing a ridiculous wig and mustache as a poor disguise, he returned to the boardwalk of Atlantic City. The interviewer asked Leonetti how his uncle, Scarfo felt about him. Leonetti replied, “I guess I would never be dead enough for him. If he could keep killing me he would be a happy guy.”

After learning about the ruthless Philadelphia mob boss Nicky Scarfo, read the chilling stories of the 10 deadliest Mafia hitmen in history. Then, learn how John Gotti’s murder of Gambino boss Paul Castellano ultimately led to his own downfall.