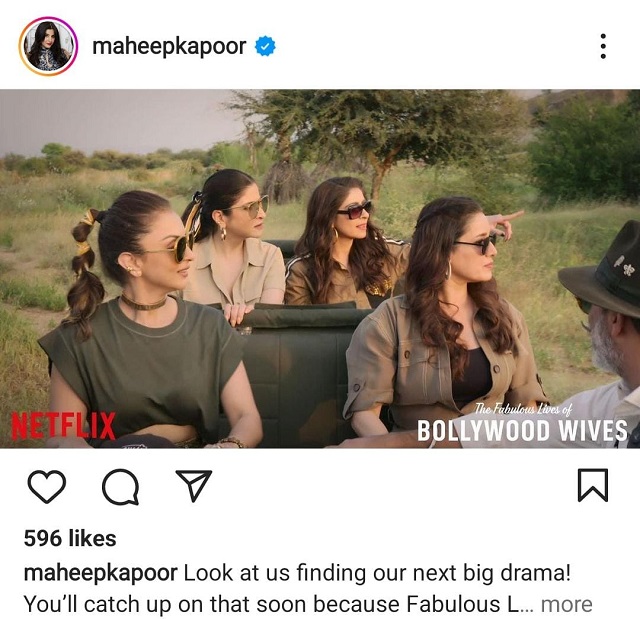 Fabulous Wives of Bollywood is about to make a big comeback. Fabulous Lives of Bollywood Wives is back with its second season. Maheep Kapoor, Neelam Kothari, Bhavana Pandey, and Seema Kiran Sajdeh are all back. Note that the OTT series focuses on the personal lives of Maheep, Bhavana, Neelam, and Seema, who are the star wives of Sanjay Kapoor, Chunky Panday, and Samir Soni, respectively. People are talking about the show, and Maheep Kapoor just posted a still from their show, which starts in a few days.

Maheep Kapoor sent out a picture from their popular show. Maheep shared a still of her, Neelam Kothari, Bhavana Pandey, and Seema Kiran Sajdeh all having fun on a jungle safari. The four wives of Bollywood stars all wore safari jackets and stylish sunglasses. Bhavana pointed in a certain direction, and the other wives looked in that direction. The caption on Maheep’s Instagram read, “Look, we’ve found our next big story! Fabulous Lives of Bollywood Wives Season 2 comes out in TWO DAYS, so you’ll have plenty of time to catch up “. Every day that goes by, people are getting more and more excited about the show.

Shanaya Kapoor is recognised for her sparkling appearance and enticing demeanour. Paparazzi…